Home Archives Profile Subscribe
Get out and Vote!
Mick Jagger is morphing at Nabin's!

The Danger Dogs are going to take a back seat to the elections today.   Even the Dharma crowd in Boudha were up early to see the results at the Little Britain Coffee Shop.   A pro-Obama crowd huddled around the (battery-powered -- no electricity, as usual) TV and watched CNN and the BBC and cheered as states went for Obama in quick succession.  Little Britain is owned by an American named Noah and he was so confident that the sign below was up for days in advance! 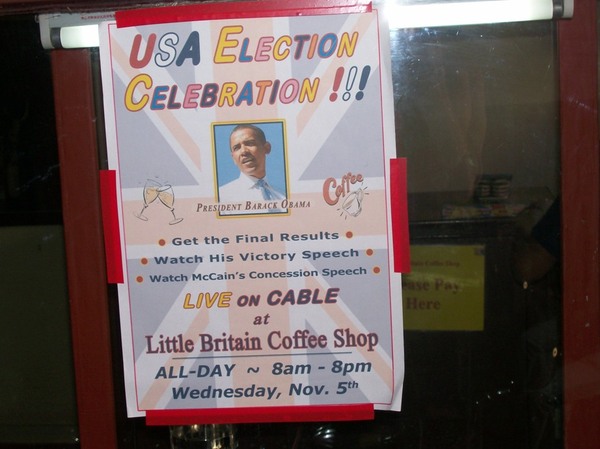 Then Dan and I moved on to the Phora Durbar (the American Club Compound open to US Citizens with a passport on special days like Election Day and the Fourth of July).   They confiscated my camera, so no photos of the lovely grounds -- swimming pool, tennis courts, etc. etc.   Dan and I even had microbrew beer for breakfast as we watched McCain's concession speech and Obama's acceptance.   The tears of joy and pride were everywhere on young and old.  Two mothers told me of their renewed hope for their children's future as a direct result of this election.

Later, there was a huge party at the Indigo Gallery in Naxal for the Democratic Club of Kathmandu.  Held in the spacious gardens of Mike's Breakfast, hundreds and hundreds of people in a good mood sang patriotic songs, laughed with pride, went upstairs to see the speeches (and SNL parodies) on a large-screen TV.  All in a good mood. 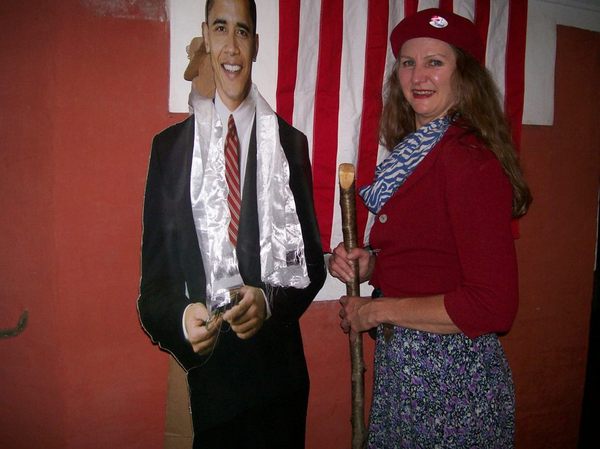 People lined up to take their photo with this cutout Obama.   Notice my now ubitiquitous stick! 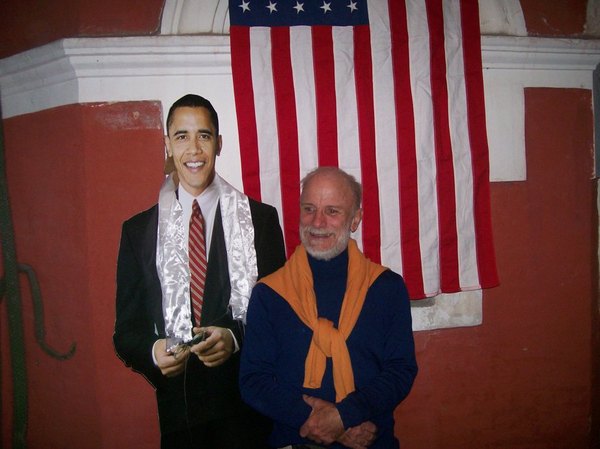 Awesome post! It is so cool to get an outside perspective of the election and to hear the Nepalese people are as happy and hopeful as we are.

BTW, we have sold 3 calendars! Yay! I didn't have my email automated to notify me of sales, but now I do and will keep you posted.

Also, I featured the calendar on my blog today...

I still am so happy with how it looks.

Would you send this link to Julia Szabo?

Thanks. Hope you continue to feel better.