Home Archives Profile Subscribe
Election Day in Kathmandu
Who will be the 1000th Dog ordered?

Mick Jagger is morphing at Nabin's!

Now that the elections are over -- Down to Business!!!

Anybody want a cartoon version of your pet?

Nabin first painted Mick Jagger in June 2007, but, as is his practice, he made two versions.  Now he's still making Micks!  And he has bloodshot eyes! (Mick's on the right below.)   You can see more Mick's on my website, www.NepalDog.com  Here's the link to the other artists' rendition of Mick along with a photo of the real Mick:   http://nepaldog.com/NEPAL_DOG/photoportrait.html        He's a pip in person, that smile, those lips...he breathes kind of heavy, though. 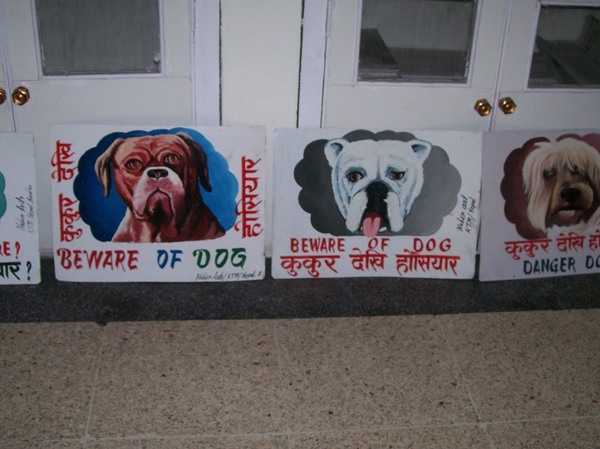 Went to pick up at Nabin's the other day.   Ordered 4 and bought 12.    Nabin has always shown me 6 paintings when I've ordered 4.   Now he's showing me 18 for 4 and it's working!   I'll probably go back and buy the rest of his spec Danger Dogs.  He gave Lazarus a straight-forward gaze losing his cocked head and a tiger coat to replace the towel in the picture. 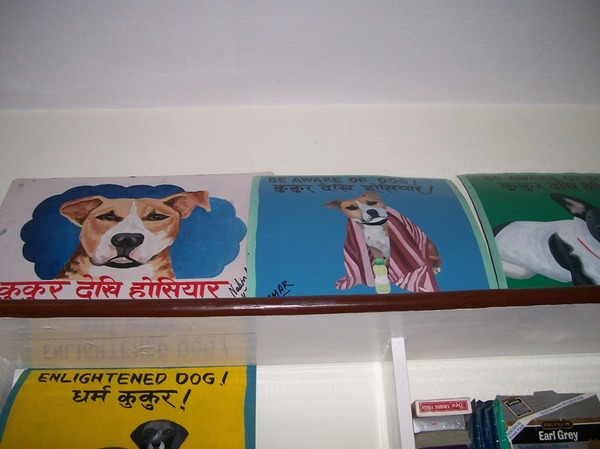 Nabin art work is very cheerful and cartoonlike.   Also 15 x 12, so extra wide.  Jerry has been transformed into a rock star!   What's going on with that shoulder?  He looks like Rod Stewart doing "Do you think I'm sexy?"!  Jerry's on the left in the photo below. 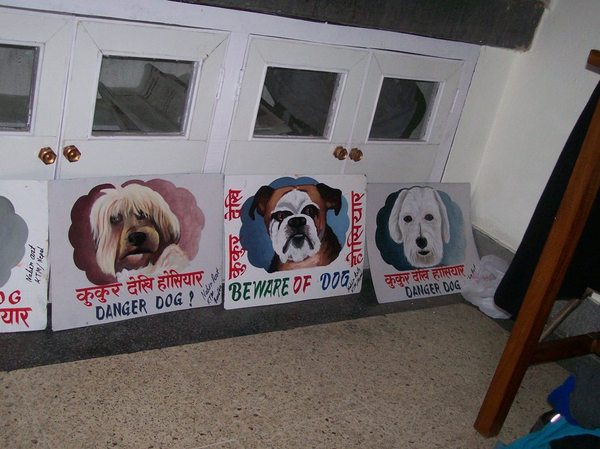 Nabin is the model artist/businessman that I'm trying to promote here.  I've encouraged him to put those other 6 spares out in his forecourt where tourists will buy them.   I'm trying to get Nabin and the others to understand impulse buying and marketing (and cause and effect).  Remember Nabin was one of two who said at the Dogs' November 2007 exhibit in Kathmandu: "If I'd known what your project was, I'd have done a better job."