As I work hard at making a catalogue of the Danger Dogs (or is it a Dogalogue), I realize that some Dogs have gone on an adventure and never returned. 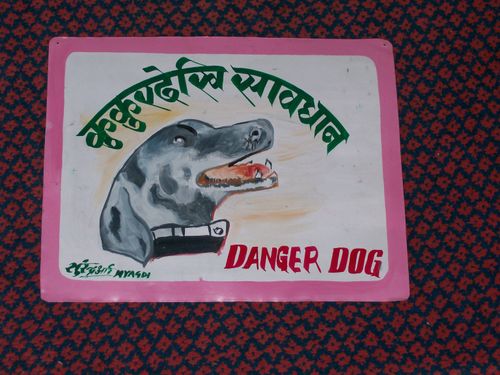 Believe it or not, this Danger Dog went missing at a charity event.   It was a 'Top Dog for the Under Dog' silent auction in May of 2008.   Animal Planet's Dina Zaphiris had won the auction, and somewhere while packing up, this Dog disappeared never to be seen again, leaving the fundraiser's organizers with a dilemma.   I was in Kathmandu at the time but arranged a substitute Danger Dog, so Dina wasn't left empty handed.    This particular signboard was one of my favorites.   Surrendra of Beni painted it from a rescue advertisement, and I don't know where the tuxedo collar came from.   It looks like this Dog needs a microphone.
And as for the person who walked off with it -  what kind of karma is that? 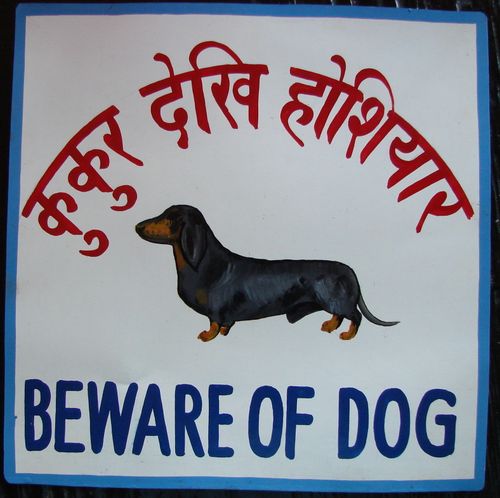 This lovely (male) dachshund is from my first Danger Dog trip, and he was painted from a stock photo of a dachshund by Lal Badahur Chaudhury.   He was purchased at a gallery in Ojai.
In January 2008, I was walking in the Ruben Museum of Asian Art, in New York City, carrying some Danger Dogs in a clear bag.   I heard a voice asking, 'Is that a Danger Dog?  I have one!'   It was a young woman named Elspeth and she described the above sign.  I showed her a picture of her Danger Dog in my book 'Danger Dogs from Nepal (Volume 1).'
Later this signboard got lost on an airplane.   Elspeth did replace her sign with a commission of her own Jasper the Dachshund.  All's well that ends well.   But if you ever see it....I'm sure Elspeth would like it back. 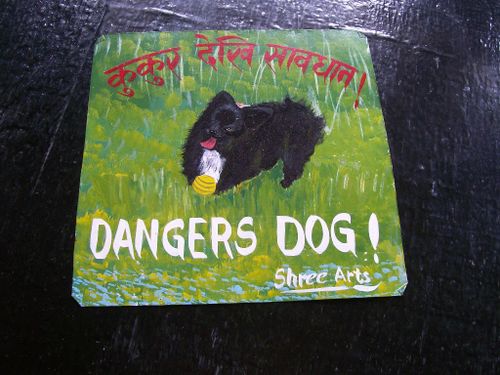 Little Niki the Pomeranian by Shree was stolen from a mailroom in Brooklyn.   I learned a lesson with this one - insure and track!    They got a nice replacement by Jit Gurung, but it wasn't their first choice.

Please contact me if you see these Danger Dogs!

We are going to Nepal soon, so please if you want to commission your own Nepali Pup Art, now is the time.   Please send your files to me at ampage1@gmail.com, let me know what you want it to say, and which artists you prefer.