Yesterday was one in a million.   The good news is that I was able to watch Sabala paint the first layer of two paintings. 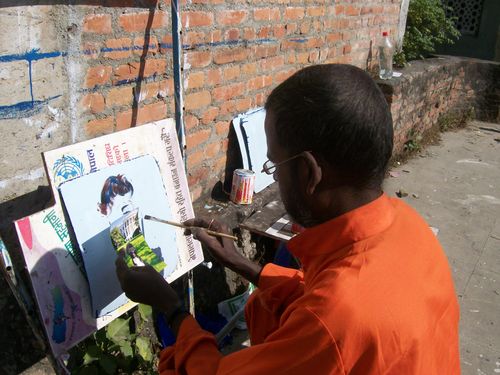 Here Sabala starts on his portrait of Bo Obama, the First Dog. 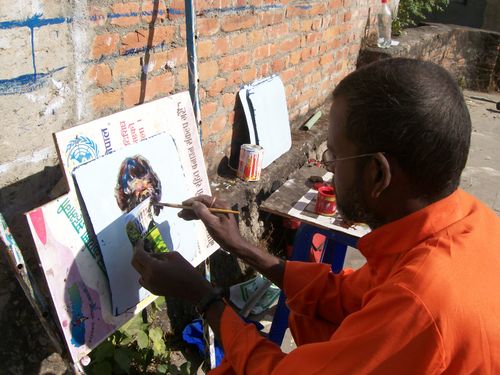 It was fascinating to see how he mixed the colors. 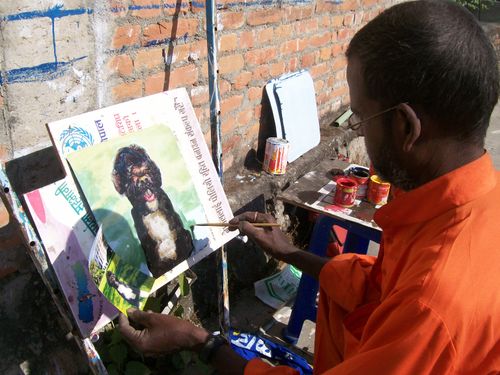 Here he finishes what is the first of 3 layers.   Once this is dry, he adds more touches, and will do a third finishing layer. 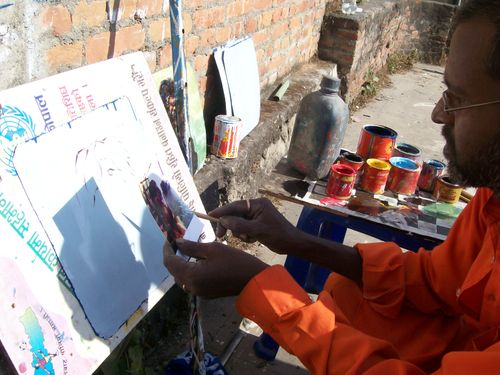 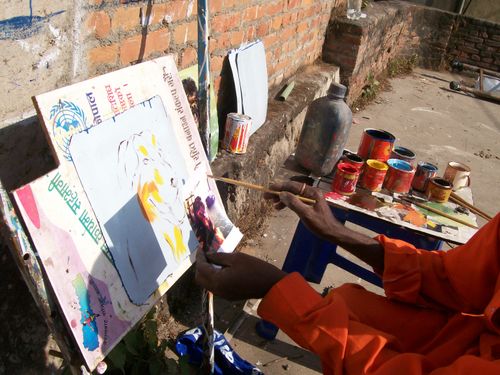 Here, working on the portrait of the lovely Jasper, he adds color highlights. 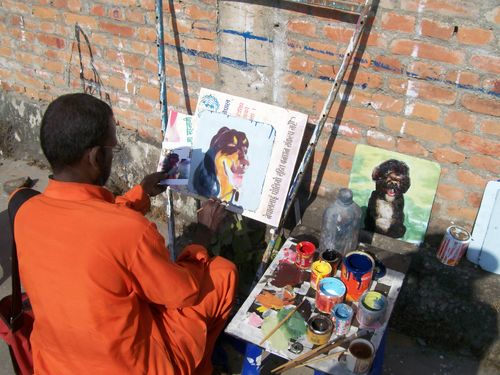 It was fun to watch Jasper begin to emerge on the hot rooftop where Sabala was painting.   It was also good to be warm.   Kathmandu is 5 degrees centigrade at night, but it warms up nicely in the daytime. 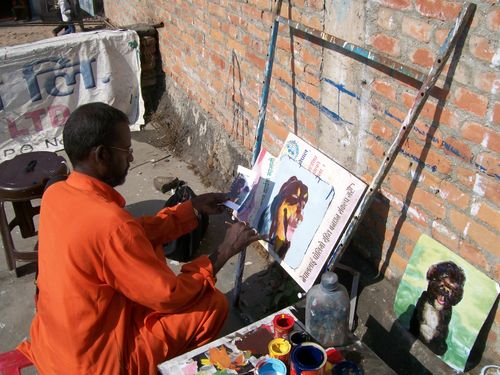 Sabala always dresses in orange from head to toe.   Originally from Kerala in India, he is one of my premiere artists. 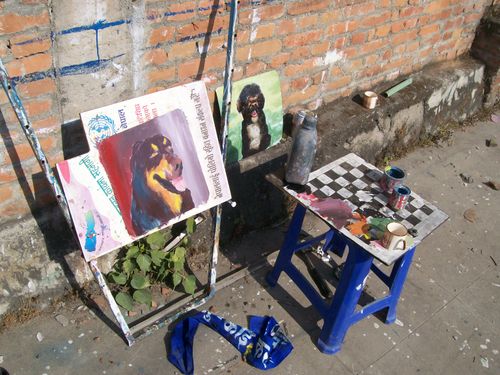 The first layer is finished! 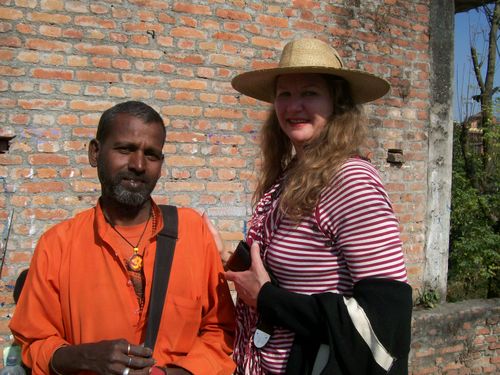 When I showed Sabala this photo, he said 'Black and White'.   I would have said short and tall! 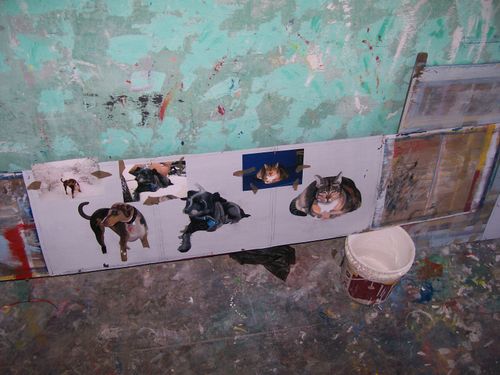 Meanwhile, back in Boudha, Amar and his paintings of Emma, the Catahoula Leopard dog in the snow, Ruthie and Lucy are underway. 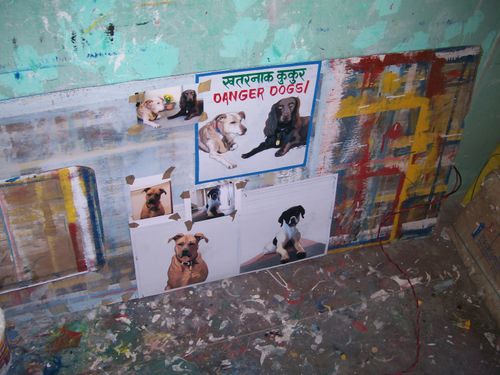 Shelby, Sophie and Stargell, and Compass here as works in progress by Amar Shrestha. 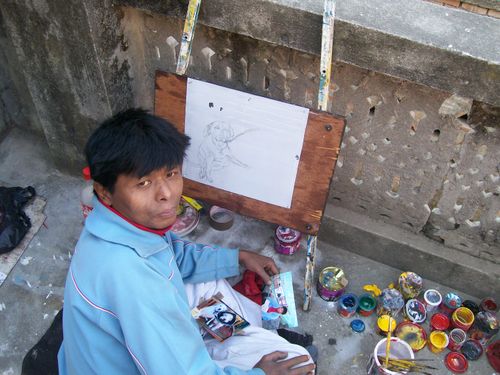 Amar begins his drawing of Jojo and Maggie again on a rooftop.

On a funny note, here is Surya Prasai, owner of Surya Art, in his latest role as a victim of lung disease in a Kollywood production.   Kathmandu's film industry is still in its infancy, but Surya plays many roles - in this film he dies, in another he showed me, he plays a big brother to a young bride.   He says he makes little money in these roles, but enjoys them immensely. 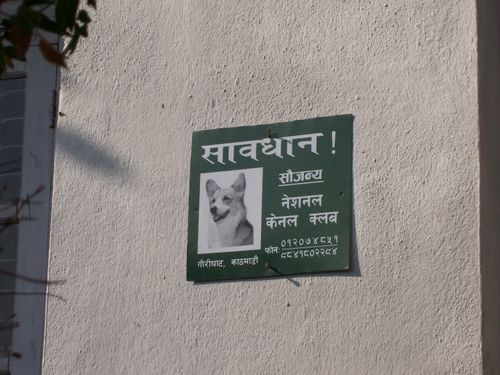 I walked miles yesterday, looking for some native Danger Dog signs, but came up mostly empty handed.   This little Danger Corgi is an exception.   A different take of the ubiquitous stenciled signs, it is a welcome change. 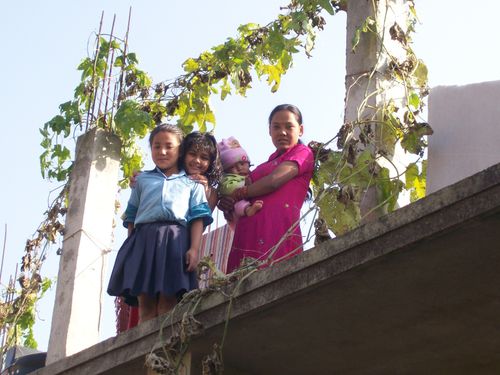 Took the bus to the end of the line yesterday and ended up in Gokarna, an old community surrounded by a forest that is growing quickly.   The little girl with wet hair spoke great English and wondered what I could possibly be doing so far away from the tourist areas.   Children here are not afraid to talk to strangers, that's for sure.

Check out the eyes on this signboard! 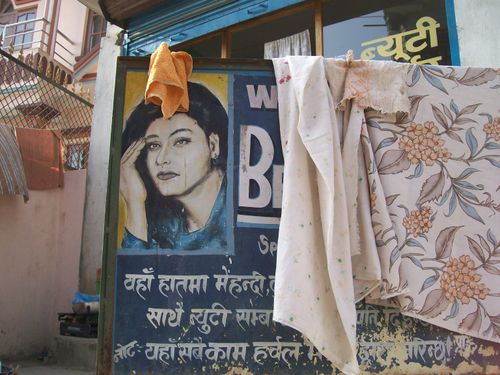 Here we are at the 'Headache Beauty Salon'.   What could possibly have caused them to choose such an unhappy picture? 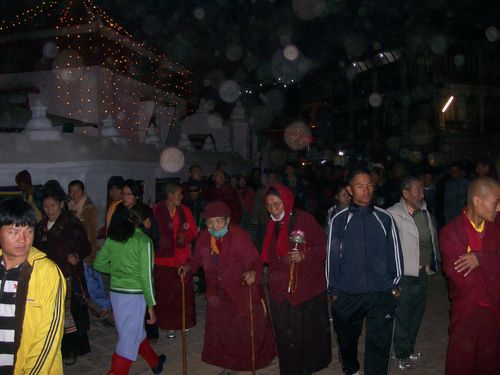 Last night, around the Boudha stupa, there was a massive demonstration protesting an upcoming mass animal sacrifice at Bara.   Brought out the orbs. A monk swings his scensor.   The Gadhimai Mela in Bara takes place every 5 years and is a mass slaughter of animals to appease the goddess Gadhimai.   Many Buddhists and animal activists are up in arms. 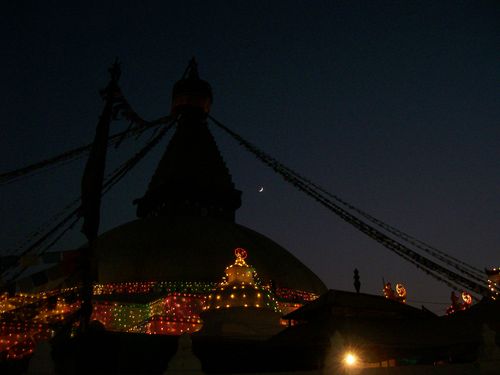 The stupa was festooned with lights under a lovely crescent moon. 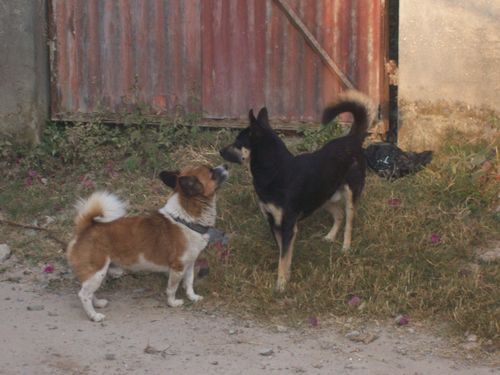 This last photo is for Daniel.   Shorty is alive and well and hanging out with his friend.   Shorty is the red and white dog, who lives near us in Boudha.   He hates being called Shorty!

Cut off time for your order is approaching!   Contact me at ampage1@gmail.com for more information or go to my website at NepalDog.com.