Back in Santa Monica and settled in

When you last left me, I was a bit of a damsel in distress, not knowing whether I'd make it to the airport or not.

It was quite an adventure!   Everyone told me that things would clear up 'probably' by 6 pm, but I had to get back and couldn't miss the exhibit last night at the Santa Monica Museum of Art.   And today is my husband's birthday.

I called a well-connected Nepali friend and he suggested that I call the Hyatt (closest luxury hotel to Boudha - where I stay) and see if the government run shuttle would pick me up.   I called them at 5:30, they passed the buck and finally I got someone that said that the bus would be there at 6pm only.   So I immediately arranged for a 'coolie' to carry my two bags to be checked.   Each weighed exactly 32 Kilos for a total of 64 Kilos or 100 pounds.    This little skinny guy showed up, and carried my bags the 2 kilometers to the Hyatt, with me following close behind with my pet luggage and two purses trailing.

Luckily, I knew the back entrance to the Hyatt, saving him a couple of steps and amazing him as we walked past the beautiful pool area and through the terrace, up the elevator with its copper plated doors.   He was amazed to see himself in the mirror in the elevator and basically looked around him like a kid at Disneyland.   His pace had noticeably slowed as we moved through the grounds and the high-ceiling, spotless and perfectly appointed hotel.    We get to the front area, I pay the equivalent of 3 days wages (I didn't mind a bit - the guy deserved it), and he politely asks the concierge if he can walk back the way he came.   I watched him disappear with his neck craning to see everything.


I'm a hard one to impress and I think it is one of the most beautiful hotels in the world.    He seemed to like it, too.

When I arrived at the Hyatt at 5:55 pm (5 minutes early), there were absolutely no cars or even hotel guests in the lobby.      At precisely 6:15, the taxis and buses started to arrive.   Of course, the Tourist bus didn't show up until 6:40, and the bellman kept trying to get me to take a taxi.      Finally the bus arrived, I was the only tourist on it, though there were about 7 armed policemen and the driver.

Made it with plenty of time to spare. 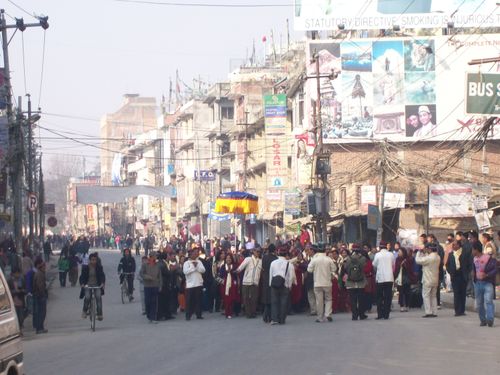 Outside the Boudha Gate.   No cars running on the street.   Not sure if this was a celebration or a protest. 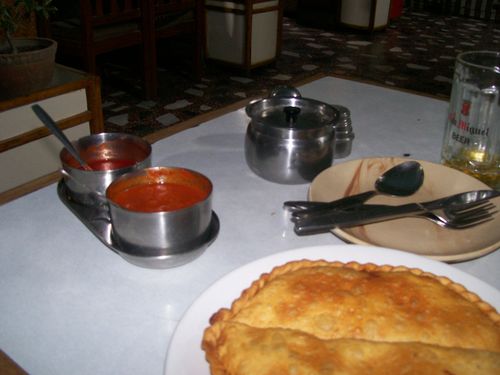 The last supper.   Wouldn't be a trip to Nepal without at least one Shapale - a Tibetan treat.   It's a delicate pastry stuffed with spiced buffalo meat and served with at least two hot sauces.   The dark red sauce was mild, and the orange sauce was deliciously hot and spicy (piru in Nepali).   This was at Bir Restaurant, just off the main road to Boudha.   Filled with a lively cast of characters - including a man with his prospective mail order bride and her giggling 9-year-old daughter, all three meeting for the first time.   Never a dull moment in Kathmandu. 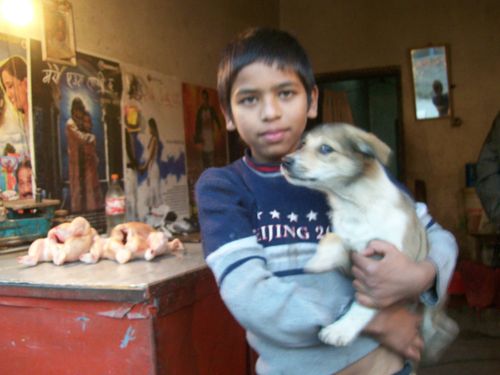 Is there a luckier puppy in the world than one born to be a 'Butcher Shop Puppy'? 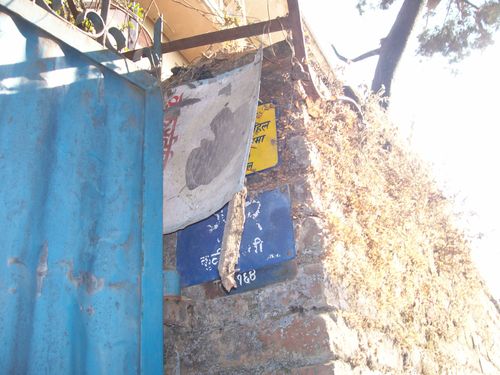 This Danger Dog is on his last legs.   He reminds me of Jack by Dilip.   Something about the eyes.

I miss Kathmandu already.   While I'm happy to see Dan again, I already miss the chaos, the colors, the constant stimulation that is Nepal.   Santa Monica is nice (and clean) but it is not Nepal.   Thank goodness (probably).

very descriptive , could see the whole thing...i marvel at your adventurous ways & lack of feeling stress. mama leaving you at the pool age 3 paid off.