Live from Kathmandu: Brick by Brick

Flash Mob:   Apparently there has been a trend in Europe -- the Flash Mob,  which uses social media such as FaceBook and Twitter to notify large groups where and when to meet.   There it has been around so long as to be banned in many places.     That trend has arrived in Kathmandu.   Many of the Nepalis who attended this art installation were notified by Flash Mob and it works!   There was a huge turnout. 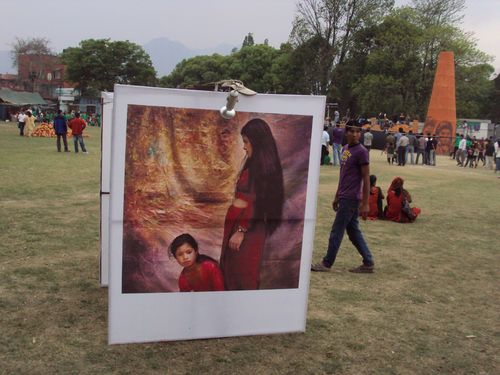 We went to see a one-day installation called 'Brick by Brick', chronicling through art, music, theater and performance the environmental degradation and social devastation caused by the brick factories that dot the Kathmandu Valley. 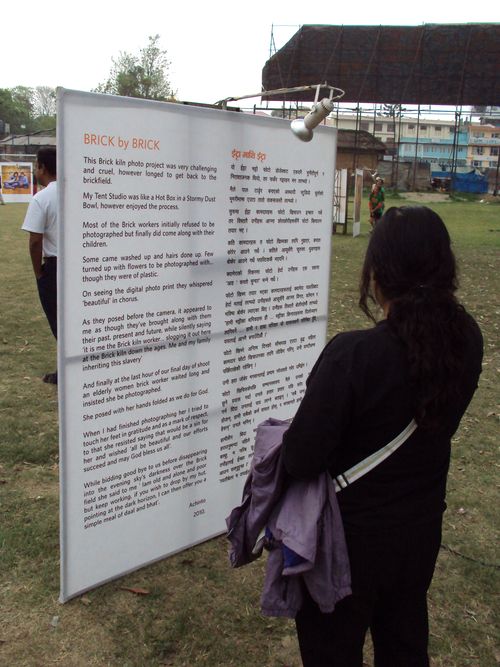 The marvelously and lovingly produced exhibit 'Brick by Brick' dazzled on many levels.   And because of the Flash Mob phenomena Jawalakhel was mobbed with Nepalis enjoying the art, music, snacks, and theatrical performances on a cloudy Saturday afternoon.

Many, many art and music lovers came out to see Achinto's fabulous photography and were stirred by his message.   If you can, expand Achinto's artist statement above to get an idea of the project in his own words. 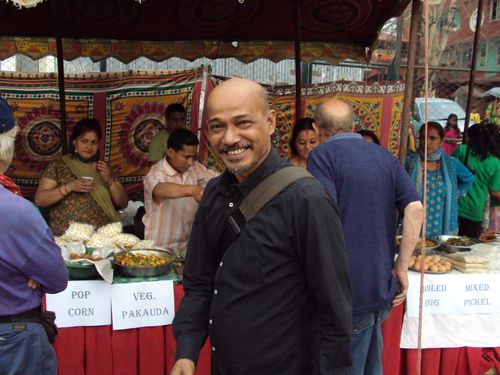 A handsome, soft-spoken man, Achinto Bhadra (above) has an easy manner that obviously won over his subjects.   At first, every one of the workers at the kiln refused to allow their photos to be taken.    With his huge 8' by 20' gorgeous canvas backdrop that had to be assembled each morning and dismantled each evening, he perservered.   Day after day, the kiln workers refused. 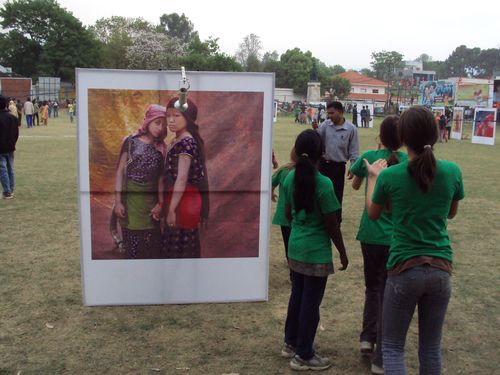 Finally, slowly, one-at-a-time, the kiln laborers agreed.   Putting on their finery, spending precious water to groom their hair, they allowed Acinto to capture their portraits in front of his luminescent scrim. 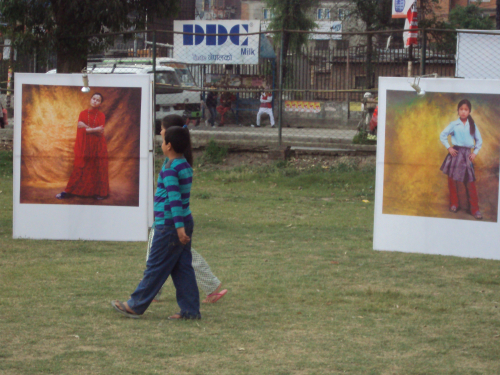 That scrim is the perfect backdrop to Achinto's bold compositions.   The affection and trust between subject and artist is evident.  When Achinto showed the digital prints to the kiln workers, there was a universal sigh of "Beautiful". 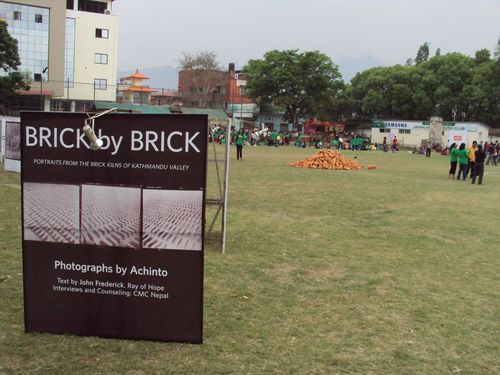 Achinto also featured a series of black and white photos that accentuate the dreariness of the kilns.  Their dusty bleakness offer a stark counter-point to the vibrant color portraits of the workers themselves.   For a full slideshow of all the portraits featured in 'Brick by Brick' link here:   http://www.brickclean.net/test/gallery/index.html

Acinto's work dealing with the plight of sex workers and modern-day slavery has been shown at Harvard University recently. 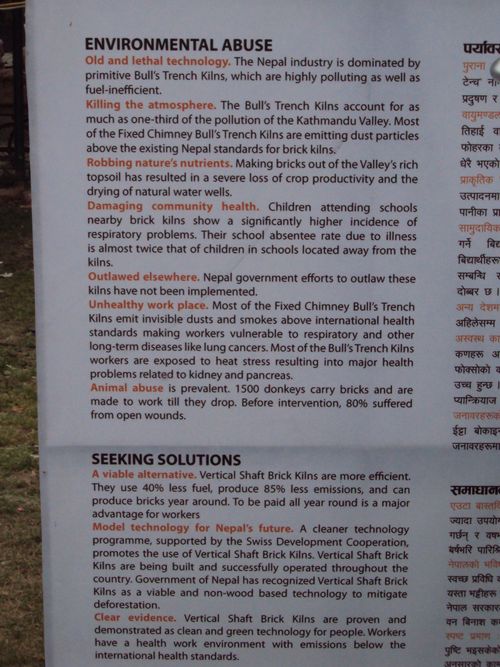 You can read a bit about the extent of the problem here.  The official website and information on how to help or contribute are at www.brickclean.net. 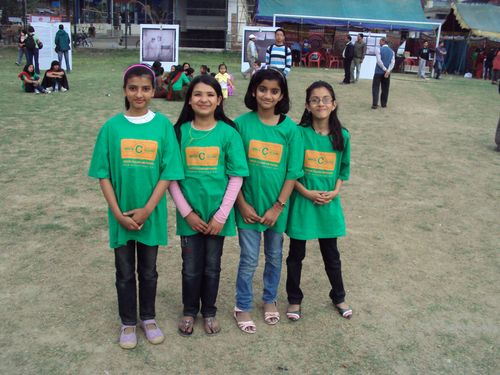 Many, many volunteers of all ages helped with the show.   These girls in their green volunteer tees are typical of the wide support that this project has received.   Long live flash mob! 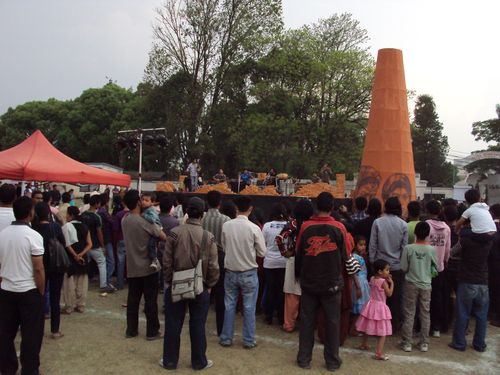 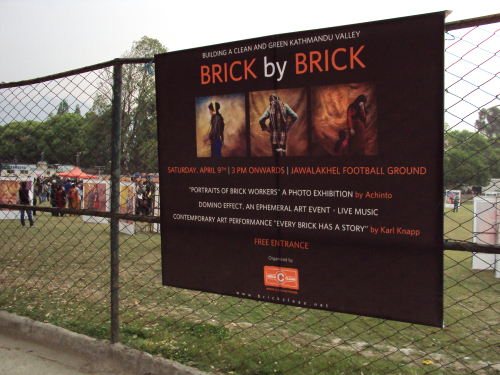 Later that evening, Karl Knapp, the French-American artist that has been such a boon to the Kathmandu performance arts, was featured.   Wish I had been able to see it.   Karl never disappoints.   And I wish you had been there too.   Another reason to visit my beloved Nepal:   fine art!

Please think of supporting the signboard artists of Nepal as well.

I am back in Nepal for the 9th Danger Dog trip and am accepting commissions now.   I'll be back to the states in early June, just in time for Father's Day presents.

To order, please send me a photo of your pet.   I will give it to three different artists, giving you a choice of paintings and three people will get work.   Each painting is about one square foot and is on metal with synthetic enamel paint.   These can be hung indoors or out, be framed or unframed.

Send your photo to ampage1@gmail.com or find out more at www.NepalDog.com.